Let’s start our short visit to the main ancient monuments in Milano.
This visit shall make an impression on you also because these monuments are scattered, almost hidden, in a modern, busy and commercial city.
We are now at the beggining of via Torino,  our back towards the Duomo. We walk on the left pavement and arrive at once at  a short road  ending  at the entrance of a Church, San Satiro.
Ok, we are inside the church. We look at the altar, and see a long space, a regular apse well furnished with columns and decorations.

But Donato Bramante, the architect, is playing with us. We walk towards the altar and, only when we are so close that we can touch it… we realize that we had been seized by sheer illusion! The most striking thing about this church is this experience.
Bramante played with the laws of our perception, availing himself of the tricks of perpective. There is no space behind the altar, just one meter.
A serious problem had actually rose when the architect design of this church was ready: the owner of the land in that spot  now called via Torino, refused to sell the space needed to build the apse.  Bramante faced the challenge: he built the same church designed in his plan with a wonderfully painted imitation instead  of an apse.
The apse measured 9 meters and 70 centimeters in the original design. Its size is 97 centimeters now!
Now we are curious about  the legacy of Bramante, and go  straight away to Church Santa Maria delle Grazie , and the neighbouring Cenacolo di Leonardo. In the latter   the great scientist and artist painted The Last Supper. Both are an absolute must-see.
Seen from a distance, this church shows only a beautiful brick red  facade, very simple, somewhat wider than higher. When you get get closer, there arises the unique hemispherical dome.
High Renaissance

Looking now for some Leonardo da Vinci works, we reach via San Marco, where  a dry short stretch of Naviglio,was left. Two dams in thick old dark brown wood, made by Leonardo, are still there, together with a garden and a few cats.
Leonardo was the one who planned all the Navigli net, as a mean to transport goods. He got the water  flow just measuring how much above the see level  some areas  were, then he ordered to excavate those canals called Naviglio, where water flows due to difference in height of the canals’ various areas.
A  legend says that a hidden misterious underground path unites Santa Maria delle Grazie with the Castello Sforzesco.
As it is a legend and nobody, as far as I know, has ever seen it, we shall walk along  normal streets with a lot of traffic to reach the Castello Sforzesco.
This is a pleasant broad place, with courtyards different in size and a  medieval atmosphere, although it is not the original  castle, as it was completely rebuilt long ago.
The Castello Sforzesco houses an absolutely breathtaking masterpiece, admired all over the world. Michelangelo’s last work. Unfinished, raw marble, where cuts can still be seen. La Pietà Rondanini.
The posture of the two persons, presumably Christ and His Mother, is most striking: the upper figure  seems to be holding up the other, who seems to be going to slide down.  The two look so blended  that some rather mystical researcher has interpreted the upper figure as Christ’s soul leaving His body.
I haven’t  yet “taken” you to Milano’s most recognisable landmark, the Cathedral, il Duomo. An unbelievable high number of architects have worked at this church for many years, centuries. The most enjoyable part of it, in my opinion, is the roof. You take the elevator, then  walk  along a path, close to statues of saints and gothic monsters.  Lo king up you can clearly  see the traits of the golden “Madonnina” who is expected to protect Milano.
Looking around you see megastores, and the top of the Galleria Vittorio Emanuele… which shall take us to Piazza Scala. Let’s pretend that you have already bought the tickets, and that tonight at 8 o’clock exacly you will see the ballet Eugene Onegin, starring the great dancer Roberto Bolle.
You’ll feel important inside that beautiful theater , red velvet and golden decorations, the curved tiers of so many boxes, u-shaped rows  in front of the stage, almost reaching the ceiling. And, believe me, the music and  dancers will give you, in the end, almost unbearable emotions. 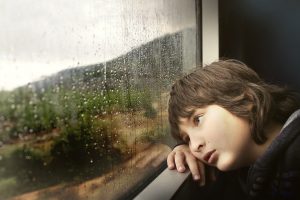